You are here: Home1 / Integration

The increasing complexity of, and regulations surrounding, embedded controllers within the aerospace, automotive and power system industries poses new challenges for manufacturers and suppliers seeking to decrease production costs and time-to-market for new products or optimizing certification processes. Companies require specialized, yet cost-efficient test benches capable of representing engineering systems with high fidelity, regardless of complexity. Complicating matters further, the shift towards electrical onboard systems within the aerospace and automotive industries has brought about the need for test environments capable of modeling high-frequency electromagnetic phenomena not found in most mechanical systems. Closed-loop test benches, such as Hardware-in-the-Loop (HIL) and Software-in-the-Loop (SIL) units, provide the most extensive test case coverage, unmatched by traditional open-loop systems. While necessary, test benches are often costly and time-consuming to implement in-house, diverting resources away from core projects.

OPAL-RT provides HIL and SIL Turnkey Test Benches to precisely fit devices, all while meeting technical, budgetary and project management requirements. See how OPAL-RT has consistently satisfied a growing customer base, including Pratt & Whitney, Embraer, Delphi Automotive, Plastic Omnium and many other organizations. 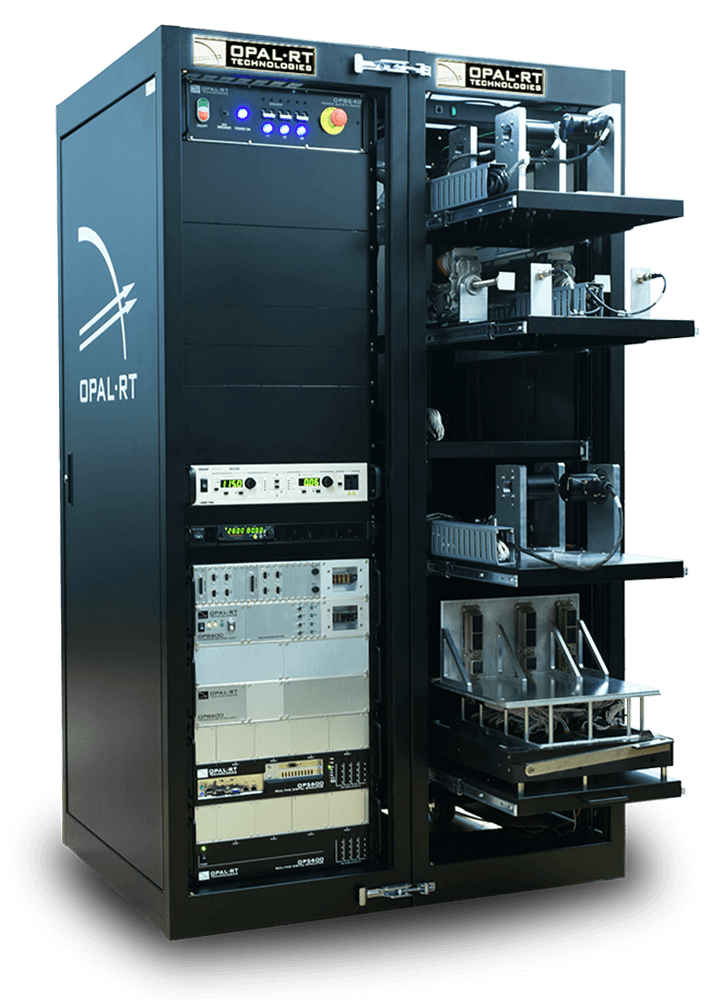 Each OPAL-RT test bench includes at least one state-of-the-art real-time simulator, connected to the device under test by custom interfacing boxes and cable harnesses, precisely designed by our experts for each customer's specifications. For further testing customization and facilitation, a large number of OPAL-RT and third-party systems, including power amplifiers, fault insertion units (FIUs), load boxes, break out boxes (BOBs), battery simulators and programmable resistances, are available. All test benches are certified to meet electrical safety standards prior to shipping.

The increasing complexity and regulations surrounding, embedded controllers within the aerospace industry poses new challenges for manufacturers and suppliers seeking to decrease production costs and time-to-market for new products or optimizing certification processes. In this webinar, discover how real-time simulation combined with our testbench architecture provided a flexible and comprehensive development, test, and validation environment.

Pratt & Whitney Canada has been working with OPAL-RT since fall, 1999, when we won a contract to supply applications and associated control system to a major transport equipment manufacturer.

This tool allowed us to develop and test the control system in an expeditious manner to meet an aggressive project schedule. Since then, the system has successfully progressed from design and validation phases through first engine run to low-speed and high-speed track testing. Throughout the project, we have been very satisfied with both the RT-LAB software and the real-time consulting services from OPAL-RT.

The distribution system has undergone tremendous upgrades that leaned towards more carbon-free, reliable, and resilient infrastructure. Possibly made by incorporating more sophisticated controllers in a conventional generation, smart inverters based distributed generation, automatic load regulators, seamless interfacing of mini, micro and nano grids etc., On the contrary, the system exposed to different events resulted from intermittent generation, unpredictable and uncertain behavior of loads in distribution networks. Real-time digital simulators from OPAL-RT let the power professionals to study these events through the digital twin models and tweaking system parameters to create diverse and disruptive steady, dynamic, and transient event signatures, and also provides real datasets through the direct interface of sensors, PMUs, remote terminal units, smart measurement/meters, for testing and validating the AI-centric data analytics. Online testing of data analytical tools is made easy through real-time simulators by OPAL_RT as it has dedicated input and output digital/analog channels for export/import signals from/to power system models and supports standard communication protocols such as DNP3, C31.118-2011, etc., This presentation revolve around wide usage of OPAL_RT real-time digital simulations in prospective testing environments of data analytics through real and simulated distribution phasor measurement units. Actual case studies are emphasized in the presentation.

Authors: Sukumar Mishra, Deepak R Pullaguram, Shivraman Mudaliyar, Ayesha Firdaus, Rishi Kant Sharma, and Dushyant Sharma
Abstract: Opal-RT real-time simulator has been used for hardware implementation of AC, DC and hybrid microgrids. The simulator is used to design control architectures for the microgrid. Using external sensors, the electrical quantities are fed to the real-time controlling running in the simulator and based on the real-time control, digital signals are given to external hardware for firing of power electronic devices. Opal-RT simulator gives capability to design and test controllers for AC microgrid, DC microgrid and hybrid microgrid.
In AC microgrids, the primary, secondary and tertiary control of inverter-based systems is developed and tested. In an inverter dominant AC microgrid, a decentralized control and a fully distributed-hierarchical control strategy is developed with key objectives are summarized as follows:
• To develop damping controller to mitigate low-frequency oscillation issues.
• To restore the frequency to its rated value as well as to achieve the optimal active power sharing using incremental cost.
• To restore the average voltage of microgrid and simultaneously maintaining the reactive power-sharing.
The experimental hardware setup is developed for the same, considering three inverters followed by LC filters, distribution lines, and resistive and inductive loads. Multiple OPAL-RT real-time controllers were used for signal acquisition and to implement the proposed distributed control scheme. The user interface and interaction with the real-time simulator was provided using the host computer. TCP/IP communication links were established.
In DC microgrids, distributed power flow control of two DC microgrids interconnected by a tie-line for microgrids owned by different utilities is achieved. To this end, the work presents a distributed control scheme to regulate tie-line power flow between two autonomous dc microgrid clusters. In this work, a unifying hierarchical control scheme based on distributed communication is proposed where the tie-line power flow control based on a pinning control strategy is unified with the distributed optimization and average voltage regulation control loops. The distributed optimization utilizes economic dispatch to minimize the operating costs of the DG, while the average voltage control regulates the microgrid’s average voltage at its nominal value. With the application of this approach, the responsibility of tie-line regulation is distributed in an economic manner without degrading the voltage quality in the system. Real-time control is achieved using Ethernet based communication system. The power system is modeled in OPAL-RT simulator while the communication system is implemented using TCP/IP based communication system.
In the case of AC-DC hybrid microgrid, a PV with its boost converter (BC), battery energy storage (BES) with its bidirectional DC-DC converter (BDC) and diesel generator (DG) with its single phase PWM controlled voltage source converter are connected to a common dc link feeding DC load. Moreover, a three phase PWM controlled voltage source inverter is interfaced at the DC link to feed three/single phase AC load. In this work, a power-management scheme (PMS)is developed to manage the load and source power imbalances and operate the system reliably under min and max SoC limit conditions. A secondary optimal power sharing control is also implemented to share the load power optimally between DG and BES.

Part 1: The global power system transition to a nearly 100% renewable-based generation presents new challenges not only in terms of control strategies but also in terms of tools required to perform HIL simulations. In this context, conventional generators such as synchronous machines may be gradually replaced by power electronic converters or similar generation units. HIL simulation setups of large grid models with multiple switching inverters are a challenge due to the high-level of accuracy that is required. The coupling of the power electronic domain with the network level domain is the major issue to overcome, nowadays. Two approaches are followed: the first one involves the coupling of the FPGA and the CPU model, while the second one uses the ARTEMiS library.

Part 2: Non-real-time or offline simulation methodologies using numerical solving techniques for network or component models have their limitations with respect to the necessity of high complexity for . Therefore, they may prove insufficient with respect to resulting simulation accuracy or computation time. Real-time simulation based HIL simulation testing can overcome these issues, because physical hardware equipment including the entire control systems is interlinked with the simulated network model via HIL interfaces. This enables natural coupling which guarantees the conservation of instantaneous power via the conservation of the through and across quantities at interfaces as exists in the real-world system.

Georg Lauss received the Dipl.-Ing. degree from the Johannes Kepler University JKU Linz, Austria, in 2006 and jointly from the Eidgenössischen Technischen Hochschule ETHZ, Zürich, Switzerland, and the Université Pierre-et-Marie-Curie, Paris, France. He is a researcher with the AIT Austrian Institute of Technology, Vienna, Austria. His main interests include electromagnetic systems, power electronics, system and control theory, mathematical methods for optimized control systems, hardware-in-the-loop simulation systems, and real-time simulation for electromagnetic power systems. Georg Lauss is the Chairman of the IEEE WG P2004 Recommended Practice for Hardware-inthe-Loop (HIL) Simulation Based Testing of Electric Power Apparatus and Controls and the IEEE PES Task Force on Real-Time Simulation of Power and Energy Systems.

The advancement of technology has allowed the exponential development in electric engineering applications, several of these fields are the digital simulation in real- time in conjunction with the synchro-phasor measurements in electrical power systems, the generation of data applying the Montecarlo method and the analysis of data by means of the application of data mining techniques. Research on load-shedding schemes together with the application of the above-mentioned fields allow the prediction of certain events that have caused the disconnection of large amounts of load and even the operating output (blackout) of large power systems around the world. The present project proposes a methodology for the implementation of a load shedding scheme as a function of voltage and frequency that allows, through an indicator, by means of an indicator calculated in real time through a previously trained regressor, to determine the amount of load to be disconnected after the occurrence of a contingency for loss of generation. To do this, a comprehensive real-time digital simulation platform is implemented, which uses the benefits of the OPAL-RT ePHASORsim application, together with the functionalities of CENACE’s WAMS system, WAProtector, to execute a Software in the loop (SIL) oriented to perform adaptive load shedding in real time, which is triggered when the indicator condition calculated by the regressor previously trained with simulation results obtained from PowerFactory is met.

Off-shore wind farms are one of important energy sources that realize the carbon neutral before 2050 in Japan. Since the depth of sea around Japan is more that 50m, facilities of transmission systems for off-shore wind farms have to be installed on floating platforms. Middle frequency (500Hz) convertor is a promising equipment that reduce the weight and volume of transformer used for substation on the floating platform. The MMC is a solution that can operate at 500Hz with less switching loss. It however requires much system analysis to develop and tune the control system. Real time simulator is a useful tool for small academic laboratories to study on the MMC. It saves risks of hardware troubles caused by mal operation of control system. An example of studies, such as fundamental operation of scaled model (200V, 1A) of MMC convertor, real time simulation for tuning of control system, and harmonics study in our laboratory will be introduced in the presentation.